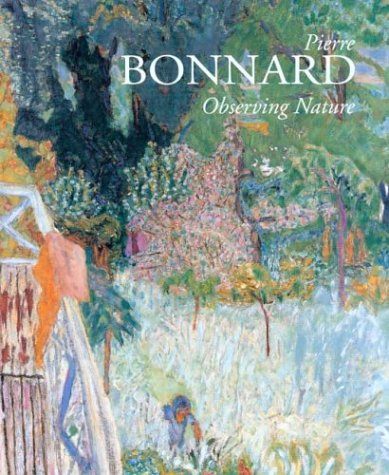 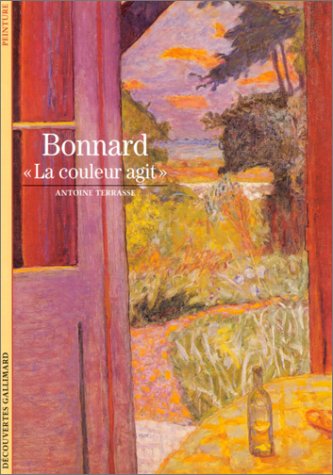 'Oh no! Not Titian, he's too tragic, but Veronese.' Veronese is the colourist of pale harmonies who fascinated Delacroix and Cézanne, and whom Ridolfi, one of his first interpreters, declared had 'increased joy and made beauty sumptuous'. (p. 8) (Jean Leymarie, Preface to 'Bonnard at Le Cannet')

"I don't belong to any school. My one idea is to bring something of my own." When Pierre Bonnard made this remark, in 1891, he was twenty-four. (p. 98) (Antoine Terrasse, 'Bonnard' Biographical and Critical Study)

"Though Bonnard's generation was quite fond of tossing bombs --or at any rate firecrackers --at the various political, literary, and artistic forms of the established order, Bonnard has nothing of the anarchist about him. He wanted neither to simplify nor to destroy painting; nor was he bent on reforming current notions about space and the object. He made light of those problems and theories that have stirred the history of contemporary art into a feverish tale of successive palace revolutions and more or less deeply experienced "agoniziing rappraisals," holding himself resolutely, even ironically, aloof from such dramatics. To some his work has in fact seemed so redolent of a bygone era, so given to the sweetness of living and the simple pleasure of painting what he liked and what he saw that they have accounted him the best behaved and most innocently Epicurean of Impressionism's successors, the last poet of bourgeois sensibility. One should not be misled. If it is true, as is often told, that Picasso one day exclaimed before a painting by Bonnard: "Piddling! That's piddling work!" his reaction exhibited perhaps not so much scorn as exasperation with an artist, possibly the only one of this time, who had not submitted to the master's influence . . . . . the pictorial syntax that he brought to maturity in the early twentieth century . . . . has shown itself so cohesive and so rich in new potential that it appears now but lightly marked by its period . . . Bonnard with his petits tons reached out toward and perhaps surpassed what is most modern in painting." (pp. 9-10) (André Fermigier, 'Pierre Bonnard)

- - - - - - - - - - - - - - -
A painter is apt to recognize (in Bonnard's works) the struggle to understand . . . "Just as he had distrusted outside influences in his early days, so now he distrusted himself as well. With his brush in one hand and a rag in the other he never stopped effacing and amending. 'It cost him no slight effort to wrest a certain grace and clarity, a nucleus of permanence from the flux of ideas racing through his mind; to change the transient into the durable. For the more restless and fugitive is the quarry, the more presence of mind and will is needed to make it forever present in its forever fugitive attitude.' How well what Valéry said of La Fontaine applies to Bonnard! . . . . . . His art stems from nature, it is an instinctive hymn to life, like the humble flower of the fields which it transmutes into something rich and wonderful." (pp 14-15) (Antoine Terrasse, 'Bonnard' Biographical and Critical Study)

- - - - - - - - - - - - - - -
His work is very private --it is intimate --while at the same time revealing of the adjustment to shifting objective considerations . . . . "He had a long-lasting, insistent gaze, which was embarrassing at first, until one got used to it, as one got used to his silences. Frail, unassuming, he never raised his voice, but he was keenly observant, missed nothing of what was said or going on around him. Now and then he smiled . . . . . Such, throughout his career, was Bonnard's response to life: one of silence and surprise, contemplation and incessant observation . . . . " (p. 22) (Jean Leymarie, Preface to 'Bonnard at Le Cannet')

"If the floor of the dining room at Le Cannet were divided into squares and --as if playing hopscotch --one stopped on each square in turn, one would discover a subject he painted. The same experiment could be carried out on the first floor, in the small sitting room, the bathroom, the studio. It could be done in the garden, and on a larger scale in the Avenue Victoria and in the surrounding hills. . . . 'In La salle à manger (The Dining Room), which I am painting at the moment, I'm trying to do what I have never done: give the impression one has on entering a room: one sees everything and at the same time nothing.'" (p. 22) (Jean Leymarie, Preface to 'Bonnard at Le Cannet')

"His daily walk to wherever his fancy took him was essential for him; it was his way of gathering from its source the pollen of space and the pith of time. Immediately afterwards he would jot down his sensations in his meteorological diaries, in a free and uncontrolled way. On returning to his studio he distilled his booty by his own personal methods, by the character of his touch and open composition. He knew how to preserve the freshness of that first vision , to offer to the moving eye a texture that is both shimmering and unified. 'A picture is a sequence of marks which join together and end up forming the object, the fragment over which the eye wanders without a hitch.'" (p. 9) (Jean Leymarie, Preface to 'Bonnard at Le Cannet')

"'I've seen these olive trees so many times, and they said nothing to me. but it rained last night, and their leaves are glistening . . . ' - "Every morning Bonnard followed a fixed ritual. Whether in the Dauphiné, in Paris, Vernon, Trouville, or Le Cannet --wherever he was, he would set off for his morning walk before breakfast. Every morning, to provide inspiration for his work, he set off to get his fill of life." (p. 21)

"In July 1946 I had the good fortune to accompany Bonnard on his last visit to the Louvre, where I was working as an assistant. He looked at his favourite pictures without saying a word, peering at each of them separately, and glanced furtively though no less intensely through the broad windows overlookining the Seine. As he parted from me in the Place du Carrousel he made this revealing, often quoted statement: 'The best things in museums are the windows.' Almost the whole of his ouevre is based on the window, that emblem of painting and symbol of visual activity. . . . . " (Michel Terrasse, 'Bonnard at Le Cannet')

NOTES - Art, Artists, Works, and the Investment of Interest. The value of investment when there is a proliferation of art objects opens up a broad range of considerations in regard to the quality of lives.

Investments - What are the prospects of a graduate student with combined degrees in mathematics and biology . . . or a license to practice law . . . . or advanced degrees in computer or other sciences? A doctor of medicine? Will the investment in time and practice pay off with an annual salary and professional affiliation? To teach, practice, administer . . . ? Those professional artists who are noted, affiliated, and proposed --who may teach or seek other practical measures -- what kind of an annual salary can they claim? Do grants and awards, on an irregular schedule, supplement an income and contribute to family expenses? What percentage of a successful sale or publication goes to the artist?

Support - Patronage does not necessarily represent investment; a patron may develop an interest in culture and the well-being of well-loved artists. Support may assist the development of promise. Will support of artists at an early stage interfere with opportunity and development and interfere with maturity and the investment over the long term to humanitarian considerations? In what way may the art or the artist be reliable -- to whom or what (the family) (a career) (a prospect) (an affiliation)?

What emphasis is placed through patronage on the concept of change or innovation --as it may effect cultural directions --in affective, historic, thematic, or other focus --such as abstract principles of relationship or expressions of joy or the nourishment of light? Is this important to cultural advancement, to people, to the profession? Does it matter as much 'nationally' as it does 'locally' . . . ?

Meaning - Is the artist or the art in some instance especially perceptive or telling or related or connected? Or, on the contrary, not at all!

Does support focus objectives or key cultural meanings? Does a focus on the quality of skill / craftmanship in works of art lead to meaning and significant contributions and make for worthy or sound investments?

Does art criticism and the public forum address the value of art to culture in general --to market investments rather than to the value of the arts to personal lives . . .?

Ownership - It is understandable that performances with limited runs and large audiences be 'documented' or 'kept' in one way and that published music or literary achievements in another. The ownership of art objects and other treasures or documents --and access --and maintenance --opens up a broad range of considerations. If the work does not have important personal associations reflective of the owner's experience and the development of a family heritage there might be as much value to simple access or display through digital media. One's online 'library' or 'archive' of works might be projected and shared without necessity to deal with maintenance or preservation issues --when the 'screens' or 'interface' make that possible. Time-sharing might enrich one's home with short-term acquisitions? High Quality reproductions are available through museums --but might be truly 'high end' in quality through Gallery investment and sale? Services that provide access by subscription or forms of membership might enrich one's shared world?

A work of art, representative of an artist's dedication to professional as well as personal endeavors, challenges the idea of investment on both the private and the public platforms. Professional endeavor might mean little more than skill development but usually represents commitment, influences, perspective, affiliation, those connections, opportunities --a passion, a lifelong contribution or 'way' through life . . . . Practical concerns may be missing entirely, while those committed may simply have the means to play out in an arena.

The value of investment when there is a proliferation of art objects opens up a broad range of considerations in regard to art and the quality of lives.

Making Artists - "Though the conventional image of an artist's mentor is not generally a venture capitalist, such a presence is not so surprising in an era when collectors from Wall Street are underwriting high prices for contemporary art. The art world is, in the end, a numbers game: as collectors, art fairs and galleries keep growing, while first-rate artworks for sale decrease, dealers and collectors are scouring the country's top graduate schools looking for the Warhols of the future . . . . " - Carol Vogel, NYTimes. April 15, 2006)

Be sure to click on the images provided above.